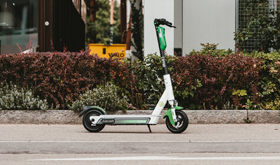 In recent years there has been a growing phenomenon in urban cities to use shared, dock-less, micro-mobility transportation vehicles such as electric scooters, often referred to as e-scooters, as a way to lessen traffic congestion and provide convenient, short trip options to urban dwellers and commuters. While these e-scooters and other micro-mobility vehicles are very popular among urban riders, they also present political challenges to local governments, as the protocols of usage are still maturing among those that utilize the mobility devices.  Accordingly, municipal governments across the nation are actively developing regulatory and licensing structures to address safety and utilization concerns.

The firm the was retained in 2018 to provide government relations services in Arizona on behalf of a well-recognized national e-scooter company to address the growing concerns among local governments in Arizona and non-riding residents during the company’s debut in the region.

Initially, the firm was tasked with assembling an outreach list of Arizona municipalities suitable for micro-mobility devices and researching each target city’s respective ordinances related to such devices. The firm then assisted the company's regional Government Relations and Operations teams to create a comprehensive outreach strategy for product launches and proactive relationship building in the various communities, ultimately assembling a list of municipal elected officials, appointed staff and community stakeholders to engage.

In select jurisdictions, the firm has been integral in moving city staff and elected officials away from overly burdensome restrictions or even a total ban on e-scooters to a more reasonable approach of establishing a pilot program.  The pilot program allows e-scooter companies to demonstrate public support and the effectiveness of regulatory restrictions applied within the respective communities.

The most recent example of a pilot program is the City of Phoenix. Initially, Phoenix had an ordinance in place banning e-scooters and there was little interest by the elected officials or the city management team to amend the ordinance to allow the devices within the community. The firm was successful in facilitating numerous discussions with elected officials and senior staff to provide education about the industry and the need for shared mobility vehicles as transportation alternative. The firm also successfully worked with other community partners, such as the Phoenix Community Alliance, the Downtown Phoenix Partnership, Downtown Phoenix Inc. and other downtown neighborhood and community leaders to help develop community and political momentum for a pilot project in Downtown Phoenix.

Ultimately, the e-scooter company represented by the firm was selected as one of the three enterprises approved to participate in the Phoenix pilot project in September 2019.