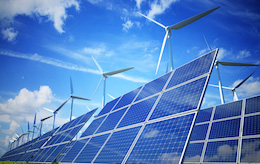 Despite ongoing concerns of a looming structural deficit in the State General Fund in Fiscal Year (FY) 2015, during the 2014 legislative session the firm successfully advocated for the passage and enactment of a $25 million tax credit to be provided to manufacturers that make a minimum $300 million commitment in new capital investment for renewable energy facilities that are specifically developed and operated for the manufacturers’ own use.

The legislation was part of a multi-faceted economic development agreement reached between the State of Arizona on behalf of a manufacturing interest represented by the firm.  While it was agreed that the Governor's Administration would not expend political resources to advocate for the tax credit, the Governor’s Office supported the legislation and utilized placeholders in the FY 2015 budget to account for the tax credit, provided that the necessary legislation was enacted.

In advance of the legislation’s introduction, the firm rapidly identified potential opponents in order to proactively eliminate tax policy concerns.  The Arizona Tax Research Association, among other respected interests, was neutralized in order to avoid legislative opposition and maintain the momentum associated from increased manufacturing operations being located in Arizona.

Given the sensitivity of client interests, the firm was challenged to maintain a low client profile while, simultaneously, maintaining appropriate transparency with all legislators and legislative staff.  Rather than draw attention resulting from testimony, the firm worked with the legislation’s sponsor to testify on behalf of the bill in three separate legislative committee hearings.  The firm worked with key legislators to develop common messages that would be used during floor debate that would provide as critical responses to questions and, equally, maintain a low client profile.

The firm utilized credible third-party resources, such as the Greater Phoenix Economic Council, to develop the fiscal analysis of the legislation, demonstrating the rate of return on investment that the tax credit would generate to the General Fund over a ten-year period.  While philosophical and political arguments are unavoidable in tax credit related legislation, the credibility of the fiscal benefit was not an issue in the debate.