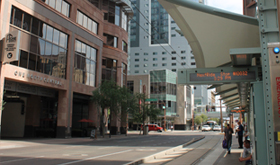 Over a four-year period, the firm was involved in a series of multiple disciplinary teams of consultants to conduct a series of four regional commuter rail studies in several urban and rural regions throughout Arizona.

In 2006 and 2007, the firm contributed to the Maricopa Association of Governments’ Commuter Rail Strategic planning effort for Maricopa and northern Pinal Counties. The firm was responsible for stakeholder outreach in the region and assisted in developing a communication plan to keep impacted and interested parties informed and engaged. Ultimately, stakeholders provided input to help shape major policy recommendations for commuter rail in the study area.

In 2008, following the success of the previous strategic planning sessions, MAG began to further explore the feasibility of commuter rail in Maricopa County by embarking on a Commuter Rail System Study that pursued a “macro” view of commuter rail in the region. Concurrently, MAG embarked on two additional studies on specific corridors: the Grand Avenue Commuter Rail Corridor Plan (Maricopa County) and the Yuma West Rail Corridor Plan (Yuma County). Similar to the previous strategic planning exercises, the firm was retained to manage the stakeholder process for all three of the concurrent studies.

The firm was specifically tasked with identifying all of the elected and senior appointed officials from impacted local governments that would be interested in serving on a stakeholder working group that would provide key input throughout the planning process. In addition to seeking input from local governments, the stakeholder process was extended to include local chambers of commerce, key neighborhood organizations along the proposed routes, large landowners, railroad interests, the environmental community, disability community leaders, transit advocates and other interested parties.

It quickly became apparent that commuter rail, as a mode of transportation, enjoyed a significant amount of popularity across all sectors of the studied region. Among the findings, it became apparent that with the advent of light rail being operational in the Cities of Phoenix, Tempe and Mesa, there was a strong interest adding a commuter rail component to the list of transportation options.

The MAG Regional Council ultimately approved all four of the commuter rail-related studies. Recognizing that community outreach efforts and stakeholder management efforts build upon each other, a large database of community leaders and key stakeholders (over 300 interested parties) was developed that will likely be beneficial in future commuter rail efforts.